When we left Chiapas for Guatemala, our first planned destination was Todos Santos Cuchumatan, a small town high in the mountains northwest of Huehuetenango. When we decided to stay for just three nights, we didn't know that Todos Santos would turn out to be one of our favorite places in Guatemala.


First, we had to get there from Chiapas. That involved traveling by bus and van to La Mesilla, a Guatemalan border town, and then on to Huehuetenango, where we spent our first night. The next morning, from our hotel in Huehue we had to make our way across town to a place where small buses depart a couple of times a day for Todos Santos.

We arrived in Todos Santos in mid-afternoon and chose a room at Casa Familiar, upstairs over a co-operative crafts shop. It was a delightful place to stay. The staff of both the shop and the hotel were super-friendly Mayan women. The photo below right is from the balcony outside our room.

On our first full day in Todos Santos, we set out in the morning for a long walk into the surrounding countryside. The sun was bright, the air bracing, and the views spectacular. 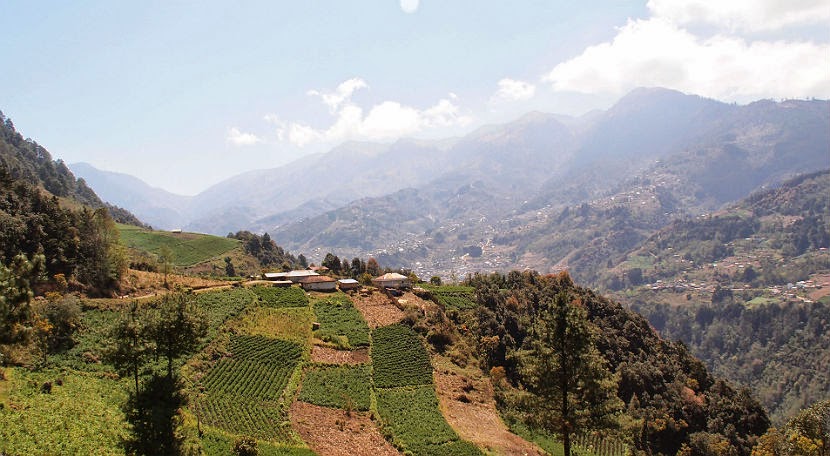 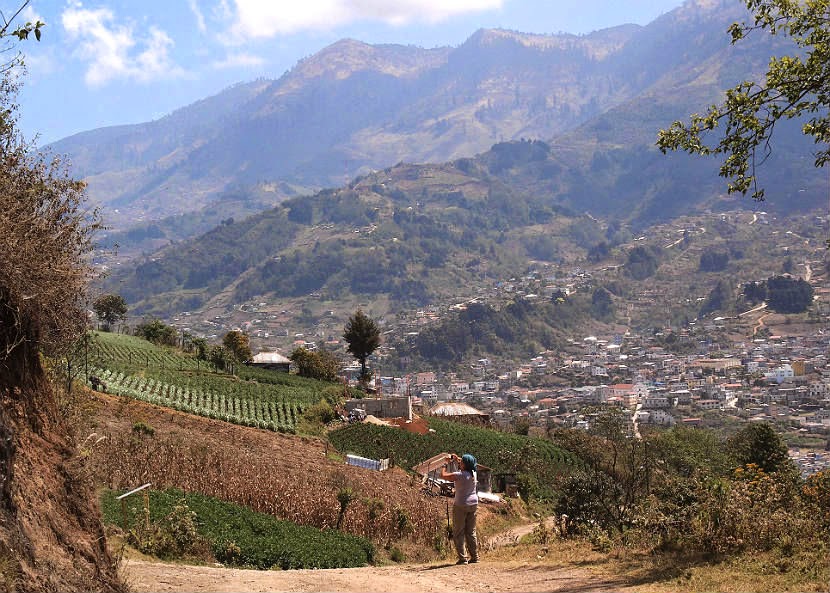 Todos Santos is one of the few villages in Guatemala where men as well as women still routinely dress in traditional garments. The man above is wearing the straw hat with purple ribbons around the band, striped shirt with embroidered collar, and red striped pants that are unique to Todos Santos.

On our second day, we decided to hike with a guide to the top of El Torre, a nearby mountain that is the highest non-volcanic peak in Central America, about 12,500 feet. Below, Barbara is with Rigoberto Pablo Cruz, our guide. The problem was weather. Drizzle and fog nearly the entire time. Although there were a few glimpses of what could have been beautiful views, it was a fairly disappointing hike. 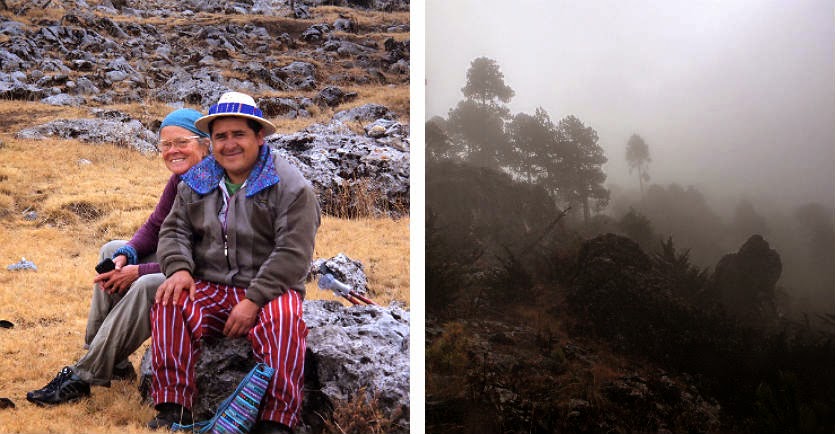 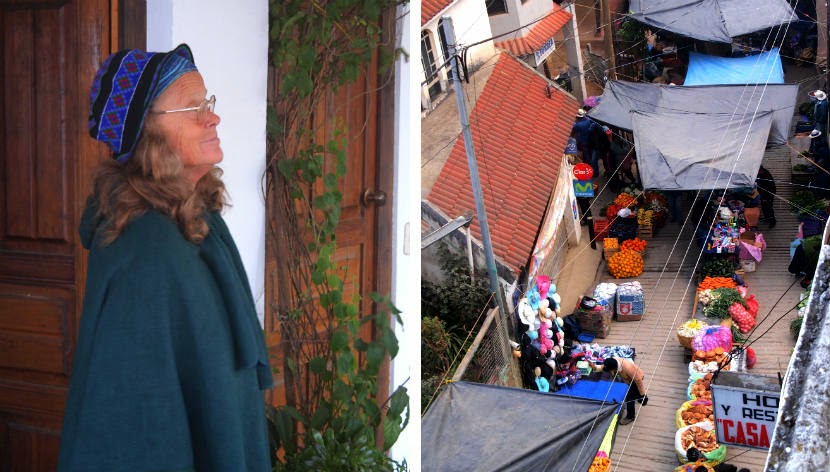 The damp, chilly weather inspired Barbara to buy a hat and a warm poncho at the women's co-op below our room. The third morning, our last in Todos Santos, the weekly market was set up in the streets. Here are a few photos taken on market day: 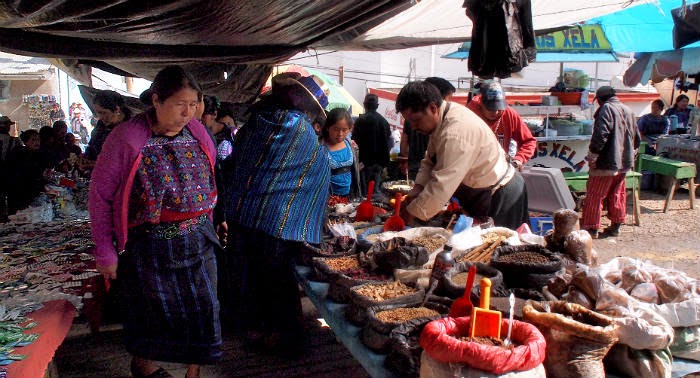 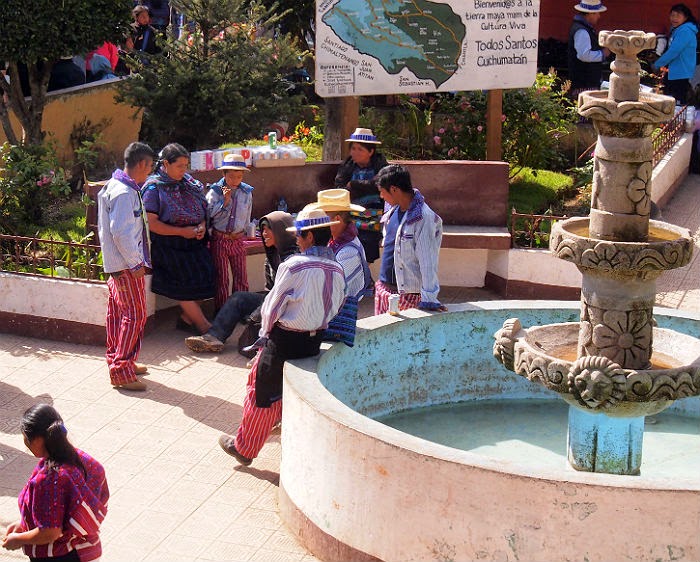 The fact that even boys, teenagers and young men are wearing traditional garments suggests that a distinctive culture is alive and well in Todos Santos.

On to Quetzaltenango ("Xela")

From Todos Santos onward to Quetzaltenango and beyond, we always used "chicken buses." These are old U.S. and Canadian schoolbuses, imported to Guatemala and given a new lease on life. We think they're called "chicken buses" because rural people sometimes use them to bring chickens or other critters to market. In fact, we didn't see livestock of any sort on the buses we rode. 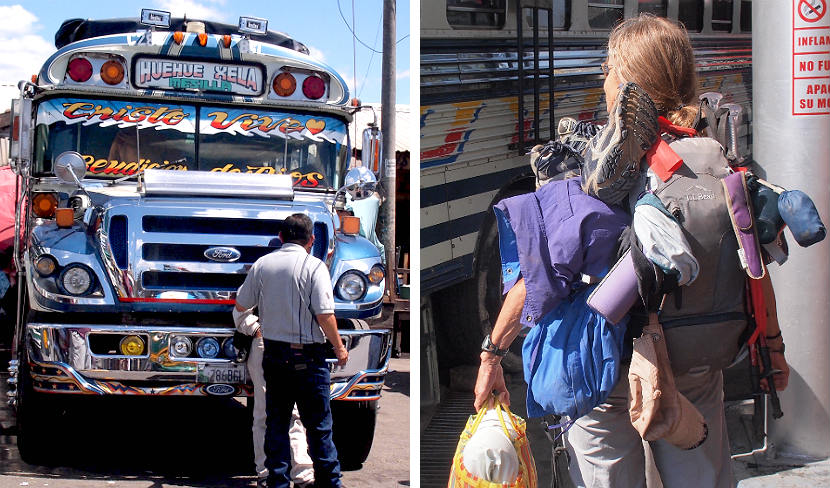 Inside, these still look like the Bluebird school buses that they are, though with the addition of religious images and signs like "Guide Me, Lord" and "Jesus Lives." Or depending on the driver's religious convictions, there may be stuffed animals and cartoon characters. (Or both - see photo below!)  The buses can be super crowded - six people across with more standing. 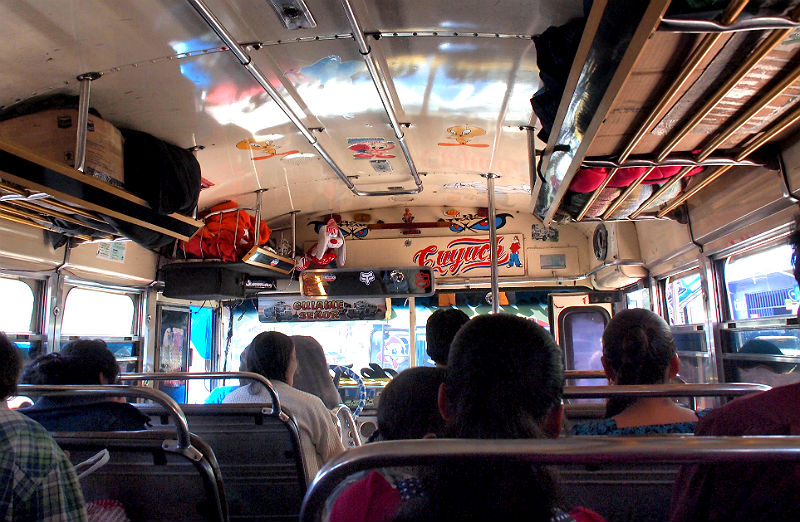 On the outside, these buses are often laden with chrome and painted in dazzling colors. In fact, if a few of these amazing chicken buses were to appear in a U.S. city, people would flock to admire them! 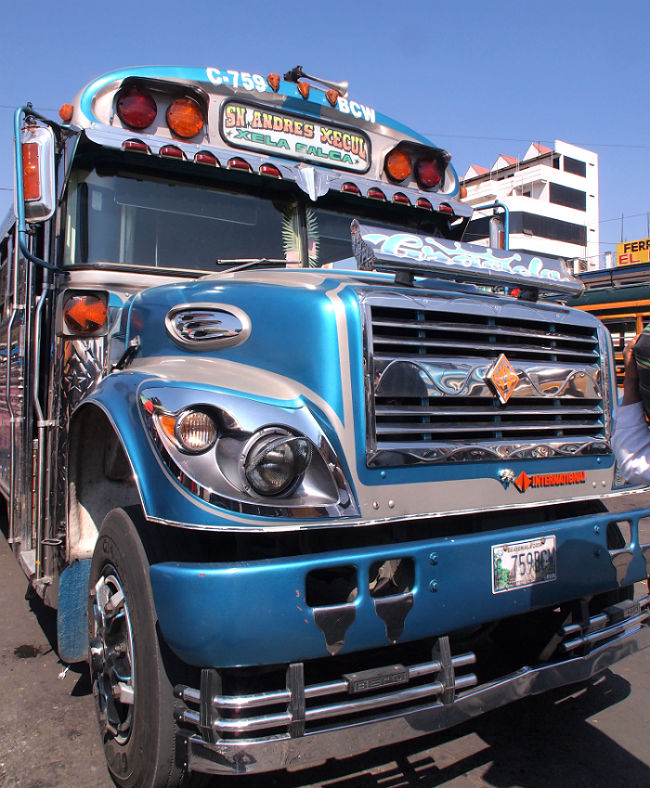 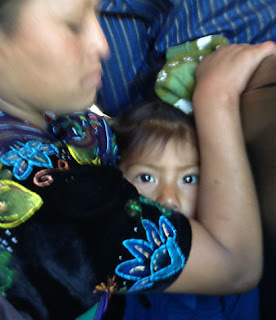 Barbara commented, rightly, that traveling on a chicken bus is like riding around in a work of art.

Another pleasure of riding the buses, for us anyway, was being up close with the local people They were remarkably friendly and cheerful. We wondered why a tourist would pay lots more to ride in a van packed with other tourist rather than enjoying an authentic slice of life aboard a chicken bus.


We rode a bus bus from Todos Santos to Huehuetenango and continued to Quetzaltenango, Xela, the same day. The enire trip was only a few hours and we arrived in late afternooon.

Xela is Guatemala's second largest city, in the highlands and surrounded by mountains. There is a handsome central square, a lively center of the city's life. 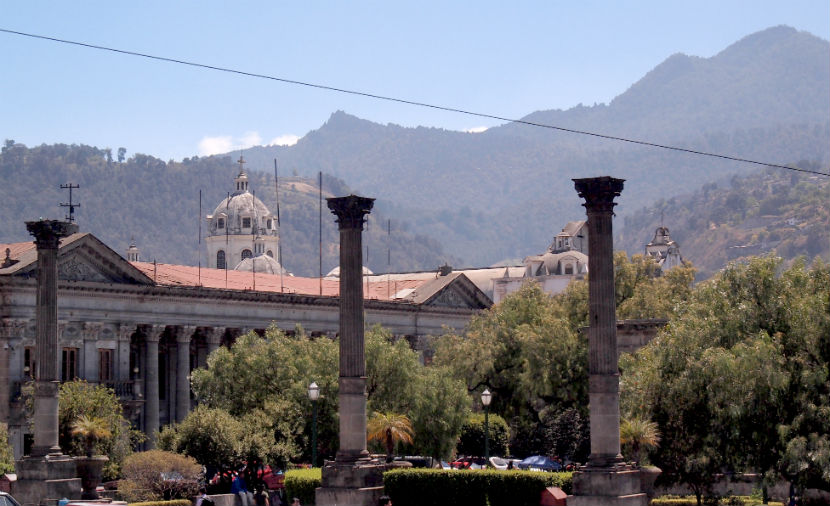 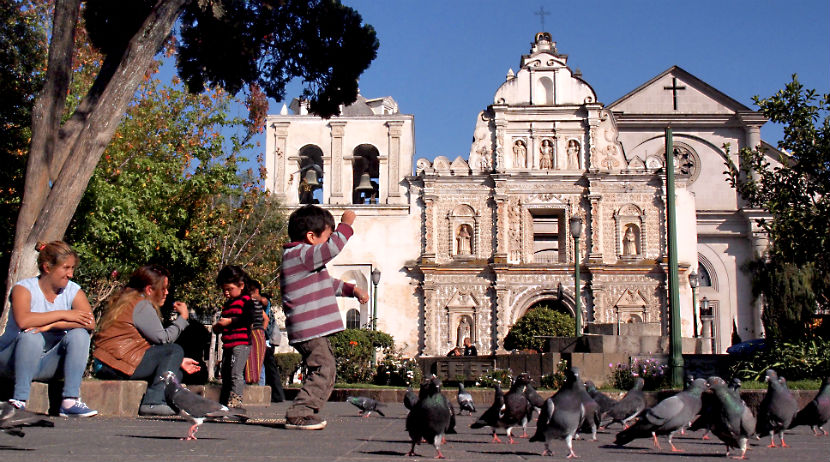 When we arrived, we were disappointed to learn that the hostel where we'd hoped to stay was full. We eventually found Casa Dona Mercedes, below. It seemed more expensive than we wanted, but it turned out that the weekly rate was much better. It was a comfortable place to stay with friendly owners and guests, and a kitchen and dining area so  people could fix some of their own meals. We ended up staying a week.

Seen on Walks Around Town 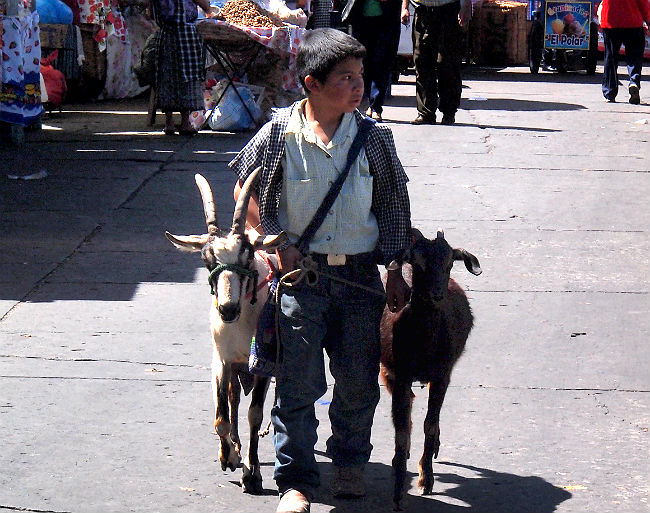 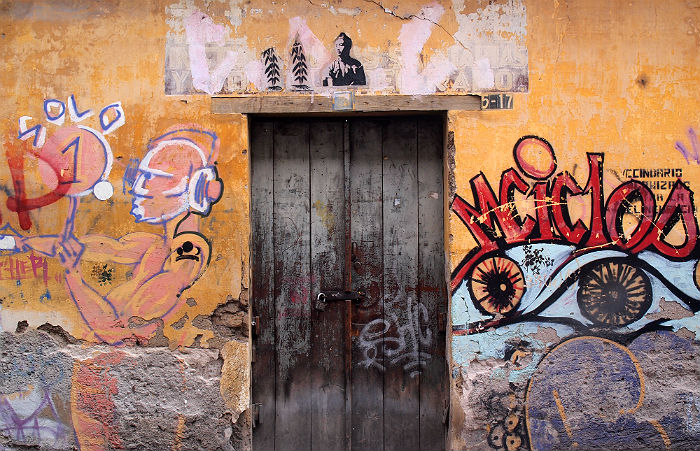 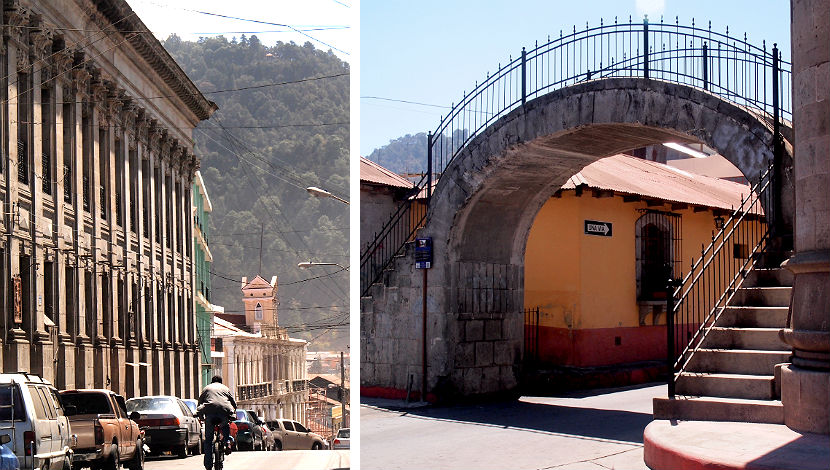 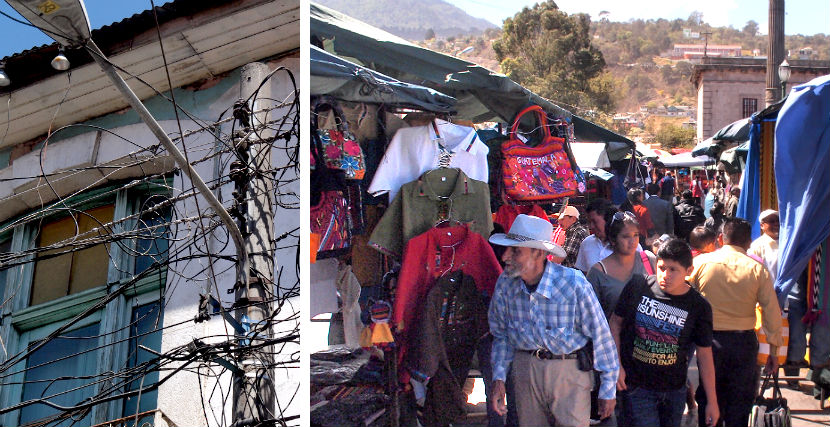 Though Quetzaltenango was quite livable for a city, we were anxious to visit some of the smaller villages surrounding it. On three separate days, we rode buses out and back to three villages: Zunil, Totonicapan, and San Andres.

Zunil was a smallish village with two principal surprises for us. First was the cemetery -- a huge hilltop city of the dead in a spectacular setting above the village. It was the site of a large gathering when we were there. We should have found out what the occasion was, but we didn't.

The second surprise for us in Zunil was the women's crafts co-op. They had a handsome, modern shop with high-quality items handcrafted locally. It was impressive. 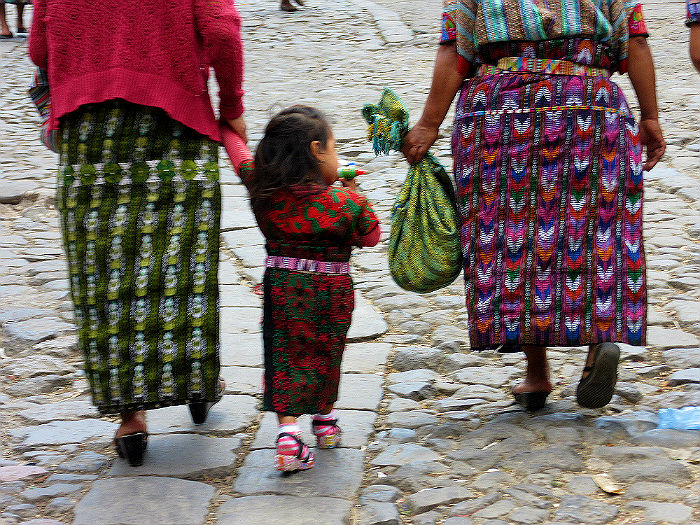 The next village that we visited was Totonicapan. It is said to have one of the biggest markets around, and unlike the famous market in Chichicastenango, it is not a tourist-driven affair. However the market, not catering to tourists, focused mainly on practical goods -- inexpensive housewares, food, clothing. None of it was particularly interesting to us, but the town itself looked clean and relatively prosperous, with some handsome parks and buildings. 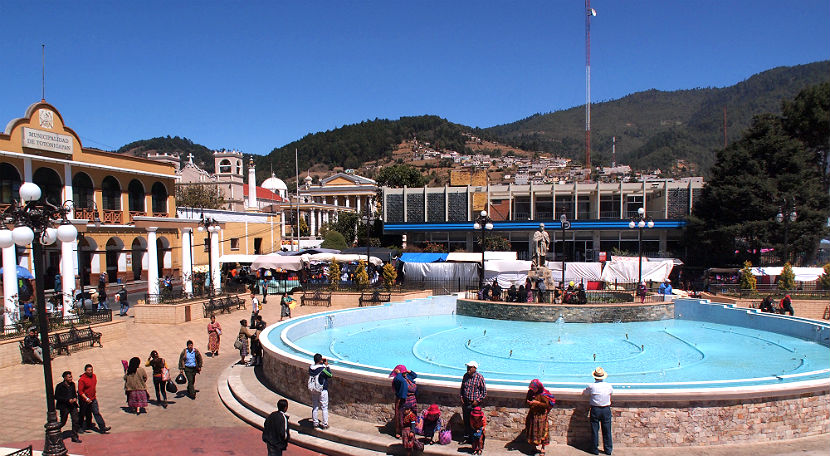 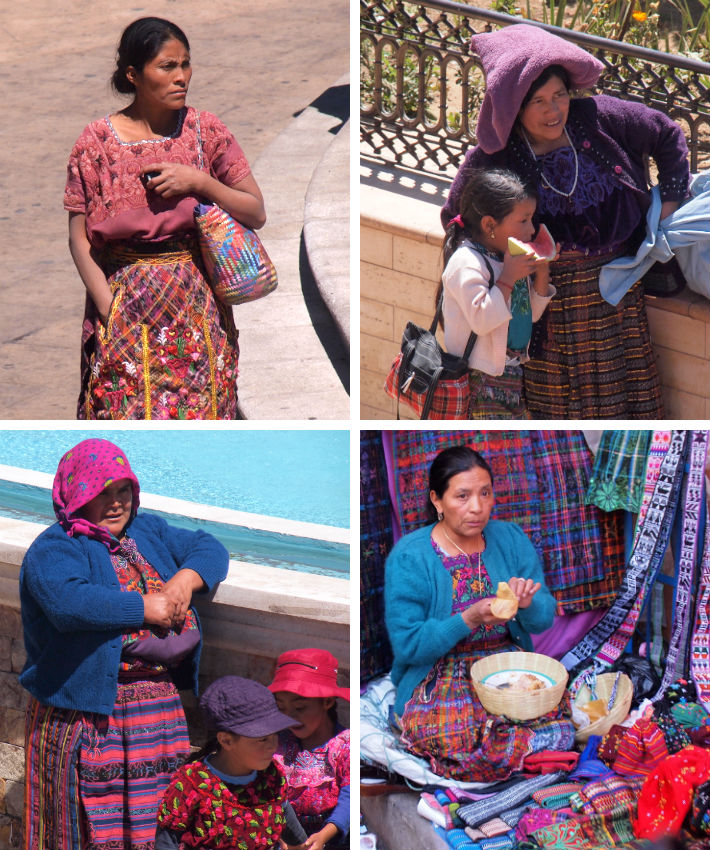 
This village is famous for its spectacular church, the facade of which is a tour-de-force of folk art. There was a small outdoor market in the plaza in front of the church. 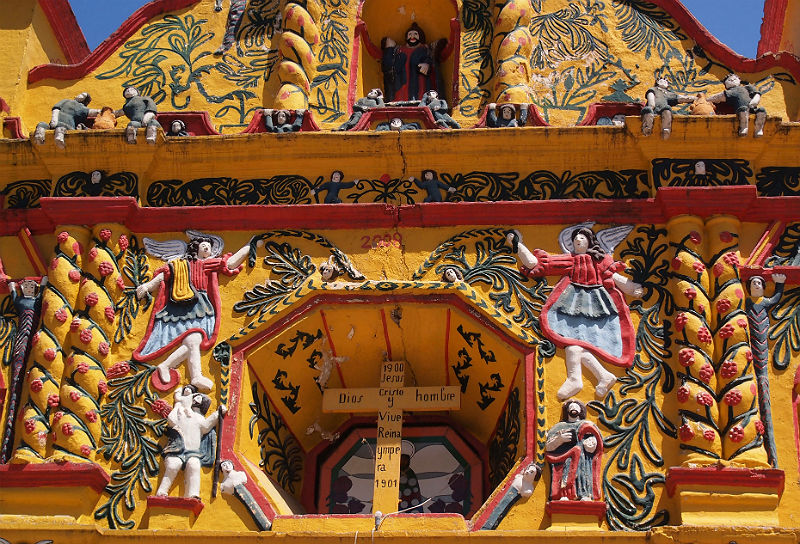 San Andres is built in the hills, with steps to the higher-up neighborhoods. Looking down, we saw signs of a local industry: spinning and dying thread, which is dried on the roofs. 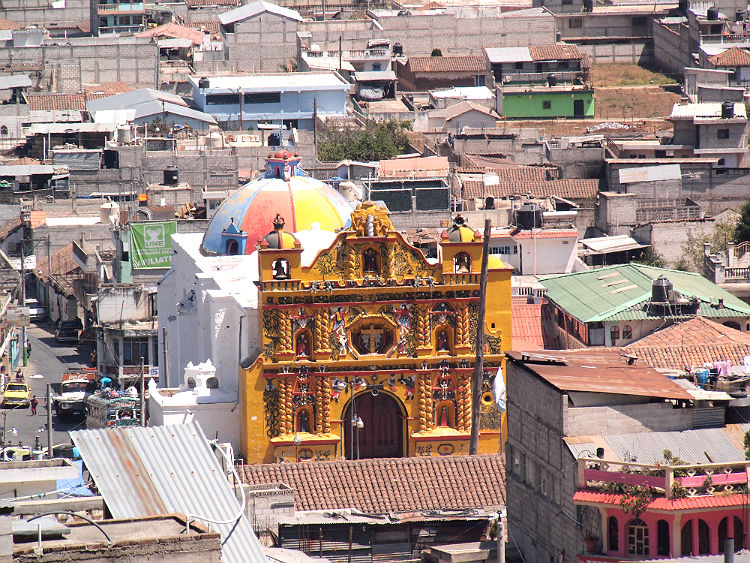 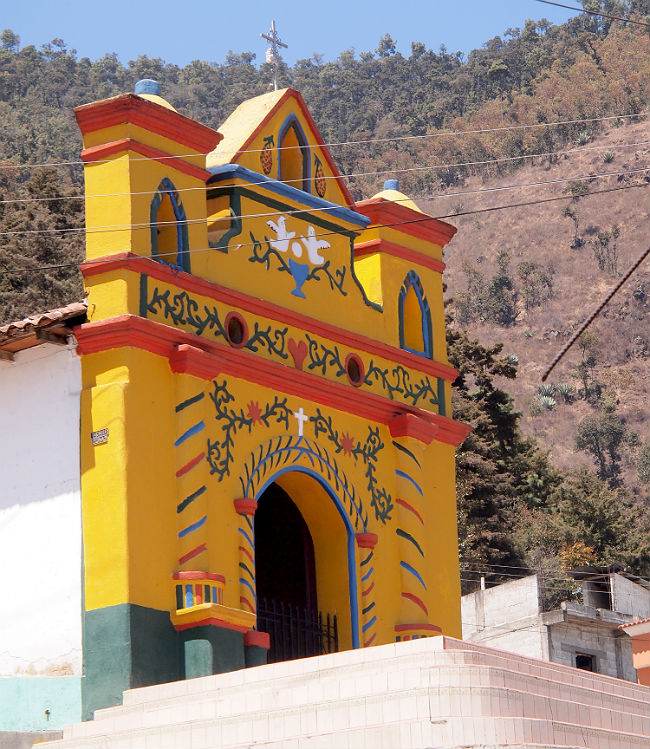 At a mirador (viewpoint) above town there is a cute chapel, built in a simpler style but resembling the landmark church below. Beside the chapel is a Mayan altar, clearly showing the syncretist nature of much contemporary Mayan worship. The sign says that this altar is built on the site of a cemetery where some of the earliest resident are buried, and it asks visitors to be respectful of this heritage by obeying a few rules like not littering, not standing or sitting on the altar, and being careful with fires.

Continue to Chichicastenango and Atitlán >>